“Where the woman is not behind her husband, the work is not going well.” – an interview with Velislava Valchinova, co-owner of a farm in the village of Sredogriv, Vidin region. 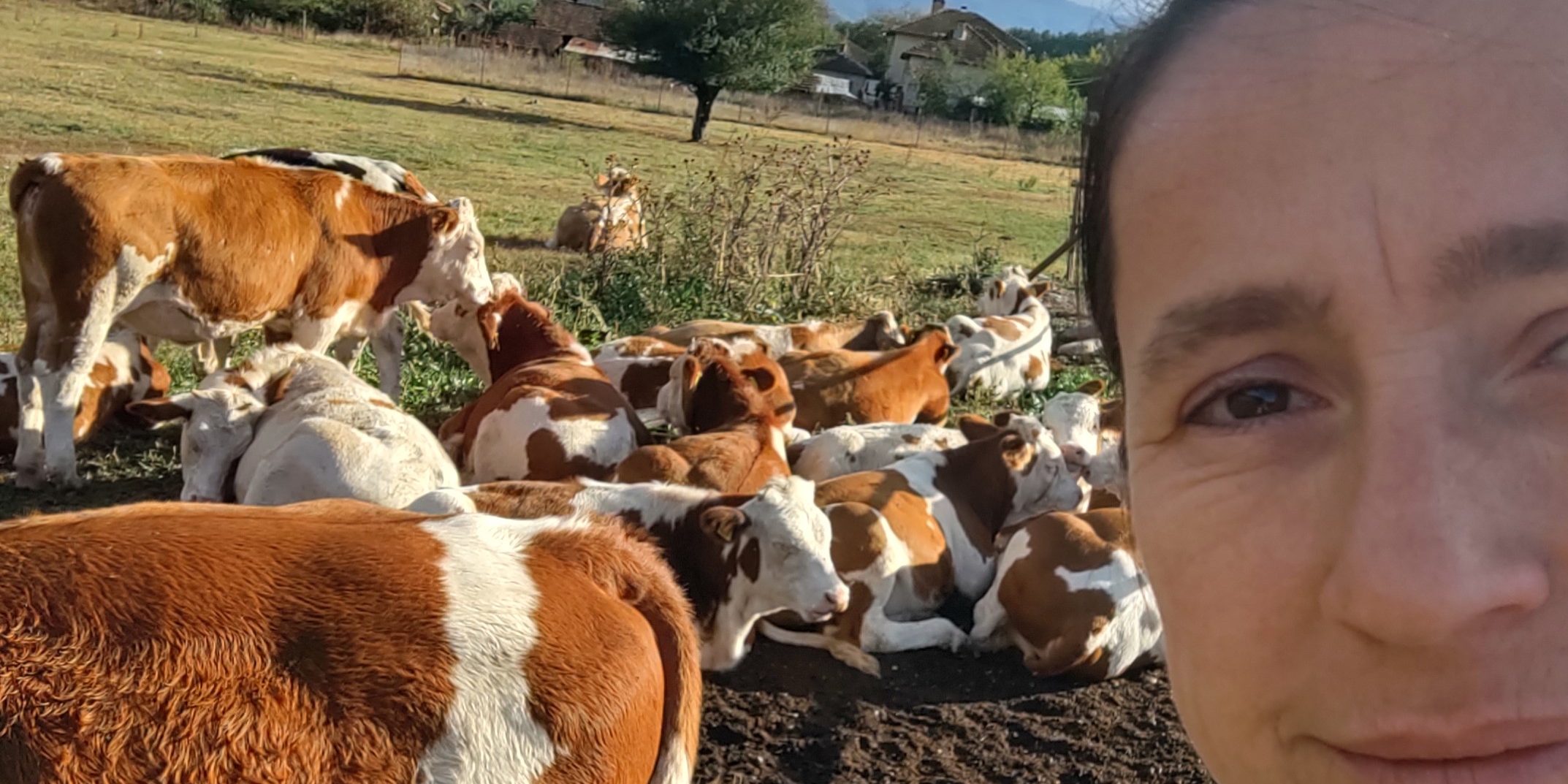 Today we are guests in the village of Sredogriv. The small village in Chuprene municipality is located 12 km from Belogradchik. It is known for its beautiful nature and clean air. The landscape is mountainous – pine forests, peace and quiet, disturbed only by the noise of the river Lom passing through the village.

In this beautiful village Nikolay Genov and Velislava Valchinova have been developing a family farm with purebred Simmentals for almost 20 years. They have experienced many hopes and disappointments during the so-called “Transition” and today they will tell us what it cost them to survive and continue…

– Hello, please introduce yourself and your husband.

– My name is Velislava Valchinova and I am 41 years old, and my husband, who is actually the driving force of the farm, is called Nikolay Genov and is 45 years old. It can be said that he and I are from the village of Sredogriv, because both mine and his mother were born here. I am a teacher by profession, I graduated in pedagogy in the town of Shumen in 2000 and immediately started working in the neighboring village of Sredogriv – Gorni Lom. Nikolai has an agricultural education from a technical school. Here we met and gathered.

– Did you decide to engage in cattle breeding together or had he already taken this path?

– He was already raising 5-6 cows with the help of his mother. He did not lack desire, and at that very moment the propaganda on television began that cattle breeders were waiting for European aid, how the industry would be subsidized, etc. “Watch animals, look at land, the state will be behind you!” – this later turned out to be, as we all know, very far from the truth. At the time, however, for us, this was an additional motive that gave us the confidence to deal with animals. We were serious.

– Was this the main reason for the decision to have a farm? At the time, people often chose Terminal 2 instead of risking such engaging activity.

– That was an additional motivation. The main reason was his love for animals, and he was already raising several.

– And did you love them over time?

– Yes, I have always loved them. It was just that at the beginning I was respected for their large size and I was afraid to move freely among them. Over time, I saw that they are very social and well-meaning animals and there is no reason to be afraid at all. Sometimes they understand and feel more than people.

– When did you buy the first animals and what were they like?

– In 2002 we officially registered as a farmer and took the first six pregnant heifers with a loan from the Agriculture Fund from the selection center in Vidin. The loan was for Simmental animals. We had chosen this breed because of the quality production, and they are very beautiful animals. That’s how we started.

Then we bought here from the village two more very nice Simmentals, which were also bought by a selection center. Slowly we began to increase them with the offspring of our animals. We kept the best and gradually made a whole herd of 15-20 animals.

In 2006 we bought the former farmyard of a cooperative farm and from there with loans, banks, mortgages, with a lot of trouble and nerves we adapted a part to accommodate the animals. There was no way to reconstruct the whole barn, as it was completely destroyed. Since 2009 we have been in this farmyard, which has gradually become our farm. It was then that the law on the export of farm animals from the settlements was adopted and we hurried to meet the requirements. It really cost us a lot of effort, and if we had to go through it again, I don’t know if we would hire.

– Deprivations and difficulties are mentioned in almost every story we tell. Unfortunately, the Bulgarian reality is like that. If you can now go back to the time when Nikolai offered you to buy more animals and build a farm, would you agree?

– Yes, and not because I want to go through the same thing again, but because if there is no support and understanding in a family, everything goes to hell. Yes, I would definitely support him in everything, then, now and in the future. It is very important that we both look in the same direction. Where the woman is not behind her husband, the work is not going well.

– Would he make the same decision again?

– We talked many times in a moment of despair, and he said he wouldn’t do it again. Disappointments are more than successes and good moments. Now the price of milk is 65 cents. In one month it has risen by 5 stotinki. On the other hand, the feed we use becomes more expensive by the day and hours.

– How do they justify this price increase?

– With the pandemic, which I do not understand what it has to do with the dry year. The truth is that grain and feed producers can afford to keep their goods and not sell them if the price is low. However, we have to throw away the milk if we don’t sell it, and everyone takes advantage of that fact.

– At the moment how many animals are on the farm and what?

– There are 45 cows and a total of 80 with calves and heifers. Only Simmental.

– What is the average daily milk yield?

– At the moment it is small – about 500 liters, an average of 10-15 liters. The winter season in our country has a lower milk yield, because calving is yet to come. April, May and June are our strongest months.

– What technology did you choose?

– They’re tied up. The conditions so far do not allow us free – boxing breeding. The animals graze during the spring, summer and autumn seasons. They are tied only when there is snow.

– Do you have land for grazing?

– Yes, my husband has inherited land, and subsequently we bought an additional 50 decares. Separately used by private individuals for rent. There is land for grazing. We are fine in this regard.

– How do you feed them? Do you use consultants?

– With individual recipes that my husband prepares for each animal. We have tried all sorts of mixtures and premixes, beetroot slices, but he knows best what the animals need. We are currently working with a Serbian mixture and we are satisfied. The manufacturer is Gebi and the distributor company is Bulmars OOD. We have been using them for two years now and the change is visible – the animals are healthier and the production is more.

– What do you consider as a mistake in raising animals and would you share it as a warning to those who follow in your footsteps?

– Our main mistakes were not out of ignorance, but out of scarcity. For example, it was a big mistake to keep all the animals together. They interfered and there was no way for the teenagers to cope with the big animals. After all, to save a person subsequently pays double and triple because he ruins his animals. We have also had accidents. At the first opportunity, we repaired another room that needed a roof and separated the milking parlors from the dry ones. The young are also separate, free – they are boxing and can eat easily. The result is visible. For 2 years the animals have been divided into groups and feel visibly better.

– On the central milk duct. Under measure 4.1 under a project in 2015 we took a tractor and a plow, and in 2016 under another project we made a central milk pipeline.

– Are you planning more reconstructions?

– Nothing concrete at the moment, as we have not set our priorities yet. We probably need a forage grinder the most in order to prepare our own food and not to depend on traders in view of the sharp rise in prices.

– Do you have workers at the moment or do you manage on your own?

– Yes, a local family. The woman is currently in maternity leave and only the man is helping. They have been working with us for a long time – for 4-5 years now with departures and returns. You know that workers are very fickle in this industry and you can’t know what will come to mind tomorrow. The farmer is also a living person and needs rest and time for his family, but as there is no security to whom you leave the animals, there is no peace. Our work is neither realized nor appreciated.

– Since when have you not gone on vacation?

– For 4-5 years we find a way to go to sea for 3 days, because of the children. But every colleague knows how real such a holiday really is. Our journey is only 8 hours.

– It is still a kind of diversity.

– My husband at times really can not stand – every day the same. We’ve talked about leaving all this, but people like him wouldn’t give up. He loves animals very much!

– Our son is 15 years old and our daughter is 13. They come and help. Especially now, because I have a hip replacement from “light” farming. But the desire is not the same as when they were little. Our son, when he was younger, got up at 5 so as not to miss his father to go without him with the tractor to mow.

– What would you wish to the young people who still feel the weight of their choice to be farmers in Bulgaria?

– To be persistent and if their animals are really in the heart not to give up no matter what!

– Great finale! Thanks and see you soon!