“We are open to anyone who needs training or specific answers.” – Interview with Professor Nasko Vassilev from Thracian University.

You are here:
ADVICES FROM THE SPECIALISTSLATEST NEWSNEWS 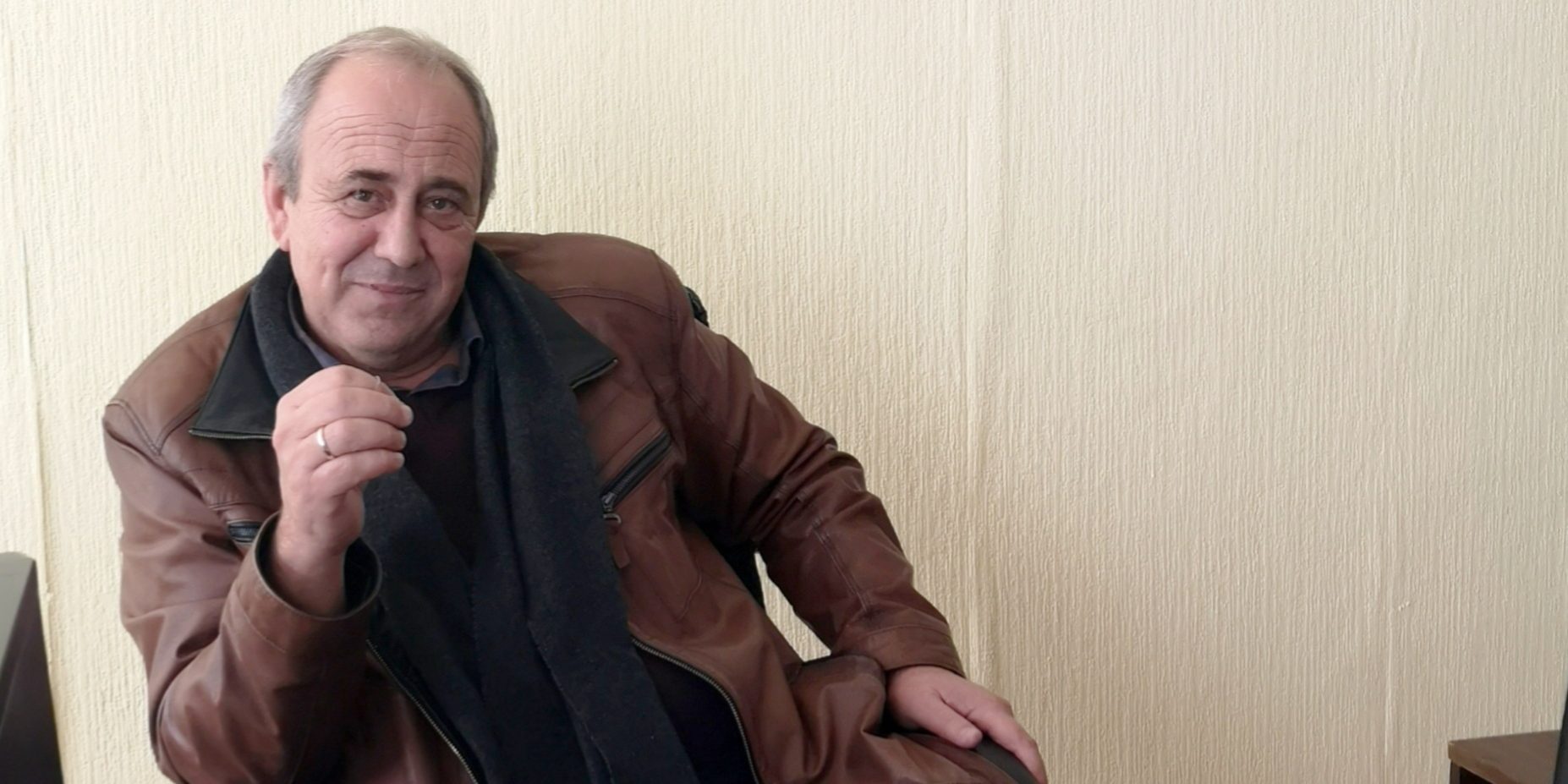 Today we will meet you with one of the most recognizable people in the scientific community in the field of obstetrics and ruminant reproduction – Professor Dr. Nasko Yovchev Vassilev. He was born on July 8, 1960 in the town of Simeonovgrad. During his scientific career he went through the degrees of assistant in the Department of Obstetrics, Reproduction and Reproductive Disorders in 1990, senior assistant (1993), chief assistant (1996), associate professor (2005), and since 2013 already professor in Department of Obstetrics, Reproduction and Reproductive Disorders at the Thracian University in Stara Zagora. In a series of interviews with him, we will introduce you to the main problems of reproduction in cattle and some useful practices for maintaining the reproductive health of animals on the farm.

In the first interview we will ask Prof. Vassilev to tell us about the department he heads and how it could be useful for each of us.

– Hello, Prof. Vassilev. Thank you for taking the time for our audience. Some of our members are your alumni or have already benefited from your valuable advice. Tell us about yourself and the institution you represent. How can it be useful for our farmers?

– My name is Nasko Vassilev and since 2013 I am a professor in the Department of Obstetrics, Reproduction and Reproductive Disorders at the Thracian University in Stara Zagora. I have been working within the Faculty of Veterinary Medicine of the Technical University since 1990. This year marks exactly 30 years of my professional career in this field. After the changes that took place in agriculture with the privatization and the formation of a new type of farming, which passed entirely into private hands, we considered that the department could be of benefit to freelance veterinarians and breeders in general. For this reason, since 1998 we have focused on reproduction in productive animals – large and small ruminants.

In the beginning we started active work with the farmers on the implementation of the early diagnosis of pregnancy, as this was one of the main moments for achieving optimal economic results. The timely insemination of animals is the basis of their economic profitability.

The first ultrasound was purchased, with which we started visiting the farms precisely for the purpose of early diagnosis of pregnancy. Early diagnosis is not an end in itself. Of course, pregnancy can be detected at a later stage – at 60 or 90 days and by other methods such as rectal examination. However, the benefit of early diagnosis is, in addition to identifying pregnant animals, to identify those who are not, and to look in time for the reasons for this.

These regular examinations allowed us to identify in a timely manner the reasons for the lack of realized pregnancy and to take adequate measures.

Thus, introducing at that time the first schemes for programmed artificial insemination, it turned out that in combination with early diagnosis, they save many barren days for farmers.

The first person who gave us a hand was your chairman Mr. Atanasov together with 2 other farms from the region of Sliven. Gradually, our business gained popularity. Over the years, many students have passed through the university – the admission is about 150 per year. All these graduates received ours in addition to theoretical and practical knowledge. In the process of training we visited farms with them and had the opportunity to follow their development and the introduction of new modern technologies, milking systems and various software products that have come out over the years. In this way we trained them effectively in the management of reproduction in a dairy farm. Currently, about 95% of our work is with dairy animals. The percentage of problems with the reproduction of meat animals is much lower.

It was these graduates of ours who remained in time and our connection with the practice. When graduating, they had the basis for starting work, but in the process of its implementation they turned to us for training in certain areas and in connection with specific cases they faced.

The department regularly conducts postgraduate qualification courses, which are related to several main reproductive areas – artificial insemination of large ruminants, early diagnosis of pregnancy and synchronization of estrus, which in the last 10 years is increasingly needed in farms.

The priority in our department is to maintain constant contact with the practice and I think that so far we manage to be as useful as possible for our students and we are open to anyone who needs training or specific answers.

In those first years, when we started our active work with the farms, there was a certain outflow of interest in working with productive animals and in cattle breeding in general. This was due to the lack of organization in this area at the time. Veterinarians were tasked with all the duties on the farms and had no time to take care of the animals’ reproductive health.

Fortunately, this has changed in recent years and animal reproductive health is now a priority and there are more and more people willing to study in this field. They are constantly looking for us and the courses have become regular over time.

Over the years, a feedback system has been built between us teachers and our already practicing students, which has allowed us to enrich each other.

In addition to ultrasound diagnostics in recent years in combination with artificial insemination and synchronization of estrus, a system has been built that allows within 100 days after birth to achieve an optimally high fertility rate from the first insemination, while the fertilization from the third insemination remained with many low percentage. This significantly increased the economic results. Of course, it is not possible to solve all the problems, as some of them come from the lack of good organization, proper nutrition or lack of adequate conditions. The constant import of animals was also a factor in terms of reproduction.

In those first years, when imports were very strong – first of heifers and then of dairy animals, the problems were many, as there was still a lack of a clear vision regarding the organization of the farm, proper nutrition and reproductive problems. in focus at that moment. At that time, the qualification of the staff in detecting estrus (dispersal) was not at a high enough level and not enough attention was paid to the monitoring. Only when 100 or more days of infertility were reached did farmers conduct the necessary research, and the problems must be resolved in a timely manner.

Things have changed a lot since then. Over time, farmers and veterinarians have realized that reproductive health is at the heart of a successful farm with productive animals and have begun to look for us to educate themselves in proper reproductive management.

I am very happy with this fact and our department is open to anyone who is just entering this field, and to those who want to upgrade their qualifications. The courses are aimed at the entirely practical benefit of a farm and are conducted both individually and in groups. Thracian University strives to be as useful as possible and its doors are open to anyone who needs help!

All this time we strive to impose the system of periodic examinations and if in an animal 35-40 days after calving estrus is not observed to carry out the necessary research of the findings and to be properly grouped to non-cycling animals and to be properly treated. It is very important to timely divide groups into cycling and non-cycling animals, with the latter being diagnosed in time and the problems resolved.

Simultaneously with this activity, part of the department joined a farm service program through the America for Bulgaria Foundation, whose work focuses on reproductive problems and limb diseases. This organization has very good traditions that we are trying to pass on. Initially, a center for consulting services was built, which over time was transformed into a “Center for Human Resources Development”. Its first purpose is educational, the second is service, which includes conducting periodic surveys on farms and trimming the hooves of animals. This activity is still carried out and we have hired employees who are our graduates and perform these services for farms with which we have contracts.

At the same time, we continued the activity of developing estrus synchronization schemes. This type of hormone therapy is allowed in the EU and everyone should rest assured that this hormonal accumulation does not subsequently endanger the health and development of dairy and meat consumers. The use of hormonal therapies in reproduction includes only preparations that are in no way excreted in milk and are completely harmless.

In this regard, it will be very useful if more farmers join an initiative, which unfortunately has not yet gained the necessary popularity – so. “Open doors” in the farms for students and others. Through this practice the society can get acquainted with the quality and useful products of Bulgarian farms, and also to attract the interest of young people in animal husbandry and veterinary activities.

In addition to regular courses, our department also organizes individual training according to the needs of those who wish and at a time convenient for them. Our goal is to be as useful as possible for anyone who wants to develop animal husbandry and we are always open to questions and new suggestions.

– Thank you, Prof. Vassilev. We will continue again with practical advice to our farmers.

– I will be waiting for you, and information about the courses and contacts of our specialists can be found on the website of the Thracian University.

In connection with one of the main directions of the Department of Obstetrics, Reproduction and Reproductive Disorders of TU – the synchronization of estrus, you can also read in an interview with another prominent representative of the same university Assoc. Prof. Stanimir Yotov, who some time ago introduced us in detail to his essence. For more information click HERE.