“The state is helping us, but it must intervene to raise the price of milk!” – Interview with Emil Deliev, owner of a farm in the village of Sofiytsi. 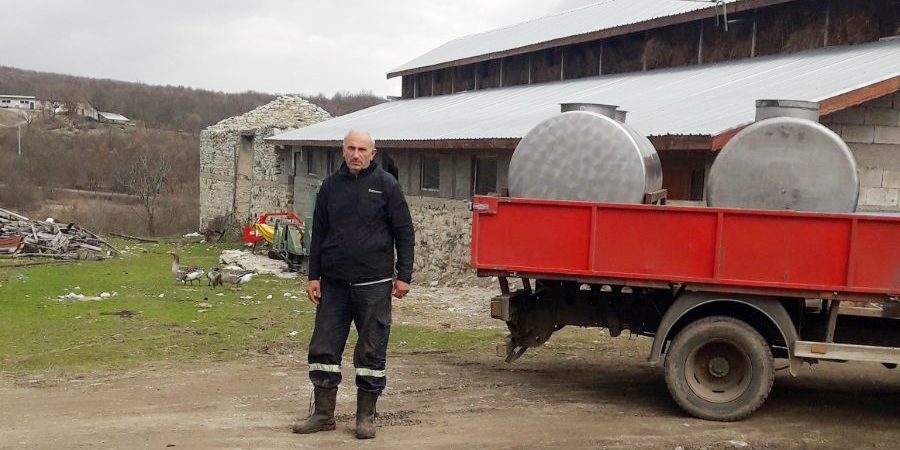 Today we will tell you a very colorful story from the Kardzhali region, where in the village of Sofiytsi Emil Deliev raises his flock Montbeliard.

He is not a hereditary cattle breeder and has learned everything on the go. Today he is an experienced farmer who went through many different activities and obstacles before embarking on this journey.

– Hello, tell us about yourself in a few words.

– Hello, everyone! My name is Emil Deliev and I am 52 years old. I come from the village of Sofiytsi, Dzhebel municipality. I have been involved in animal husbandry since 2000. Before that I was a mechanic and I had a small business in the field of transport.

– Tell us, how did you decide to focus on animal husbandry? Did your parents raise animals?

– No, they were involved in construction, and I have always loved animals and raising them was a favorite hobby for me. Over time, this hobby became my main activity.

At first I started in a backyard next to the house. Subsequently, after they literally robbed the already abandoned yard of the cooperative farm in the village, I took it and started a duck business. Unfortunately, I fell victim to unscrupulous buyers who “set me on fire” with 6,000 units and this led to the bankruptcy of this activity. The losses were huge, more than a million levs, and the shock even greater. Everyone in my place would go crazy. Instead, I went to Greece and there I learned how to make livestock. When I returned, I first started pig farming, raising 180 pigs at the base I had bought.

However, cows have always been my weakness, and I saw a greater perspective for development. In the year 2000, I started with crosses and gradually, through artificial insemination with Montbeliard bulls, I almost cleared the herd. The base where I now raise animals is new. I decided to tear everything down to the ground and build a cattle farm the way I wanted, rather than remodel old and useless buildings. I did everything according to the standard and requirements of the veterinarians who advised me.

– As far as I know, you were also the mayor of the village. How did you manage to combine public work with animal husbandry?

– My only term as mayor ended a year ago.

– Why didn’t you run again?

– Both things simply cannot move at the same time, and the attitude towards the mayor with his own business is special. I was fed up with ill-intentioned and untrue talk and comments that I almost benefited my business during my term. These were absurd allegations, as I was not spared any inspections and the farm was fined while I was mayor. This only proves that the rules applied to me even more. But people can’t be pleased… This is the Bulgarian mentality. Anger and envy always prevail, unfortunately!

I am pleased with what I have achieved as mayor – I have left behind many good things, we have built monuments and we have fixed many neglected things. The time will come and this will be appreciated. I prefer my actions and results to speak for me, and there will always be stories.

– It is not an insult, but the truth itself. It so happened that two people did not reach the village for direct election of mayor. They have set up a comfortable person now who will listen and perform. In the next elections I can run again if they make me angry and I will become mayor again!

– At the moment, how many animals are on the farm?

– Over 40, and milk is currently half. They are all Montbeliard.

– How do you raise animals?

– Pasture pasture. At the moment they are tied up, and when it is warm they are grazing on rented municipal meadows. We milk them with units, but I am considering building a milking parlor.

– Have you managed to take advantage of any program during these years to optimize the economy?

– My son applied for the measure as a “young farmer” and I made him the owner of 30 animals.

– Are you thinking of building a dairy in the future?

– It is not excluded, but it is not on the agenda. Dairies have become more than farms, but that’s another topic.

A new dairy is currently being built in Kardzhali, which will be closer to us. My wish is not to sell to resellers, but to have my own transport and sell directly to the dairy. So I hope that we will finally be able to get better conditions, because of the excellent performance of Montbeliard’s milk.

– What do you want to change or build on the farm in the coming years?

– I need the milking parlor and a box for fattening male calves. I hope it will happen in two years if I am alive and well!

– Does the family help on the farm?

– For me, everyone in the family actively helps on the farm! Otherwise we will not win anything! This is a family business for me. Isn’t there support from all things not going well.

– Don’t you have any workers?

– You said that you were often subject to inspections. Was their outcome fair?

– Verification is a supreme form of trust. I have never been bothered by inspections and I have suffered the consequences when justified. I can’t say they were unfair. I even think that the control should be stricter, but it should be the same for everyone.

– Are you allied with other fellow farmers in the region? Do you help yourself?

– There is no way, because envy and malice have been great since time immemorial in Bulgaria.

– Do you hope that this will change over time?

– No, I think it will get worse, unfortunately. The state is helping us, but it must intervene in order to raise the price of milk and make people live, and for the business to start! My observations are that every year we get closer to the bottom and the moment will come, as it was with tobacco – to exist stubbornly!

– Are you satisfied with the cooperation with NARMS?

– At the moment I have no comments. We do our job – her association and things go well.

– Hopefully, after all, a bright future awaits us! What will you wish your colleagues for the final?

– Grit your teeth! Our time will come, but we must be persistent and not give up! May you all be healthy and very lucky! Thank you for your attention!