“Milk is cheaper than lemonade in the store!” – interview with Ivo Ivanov, owner of the farm in Lazarovo 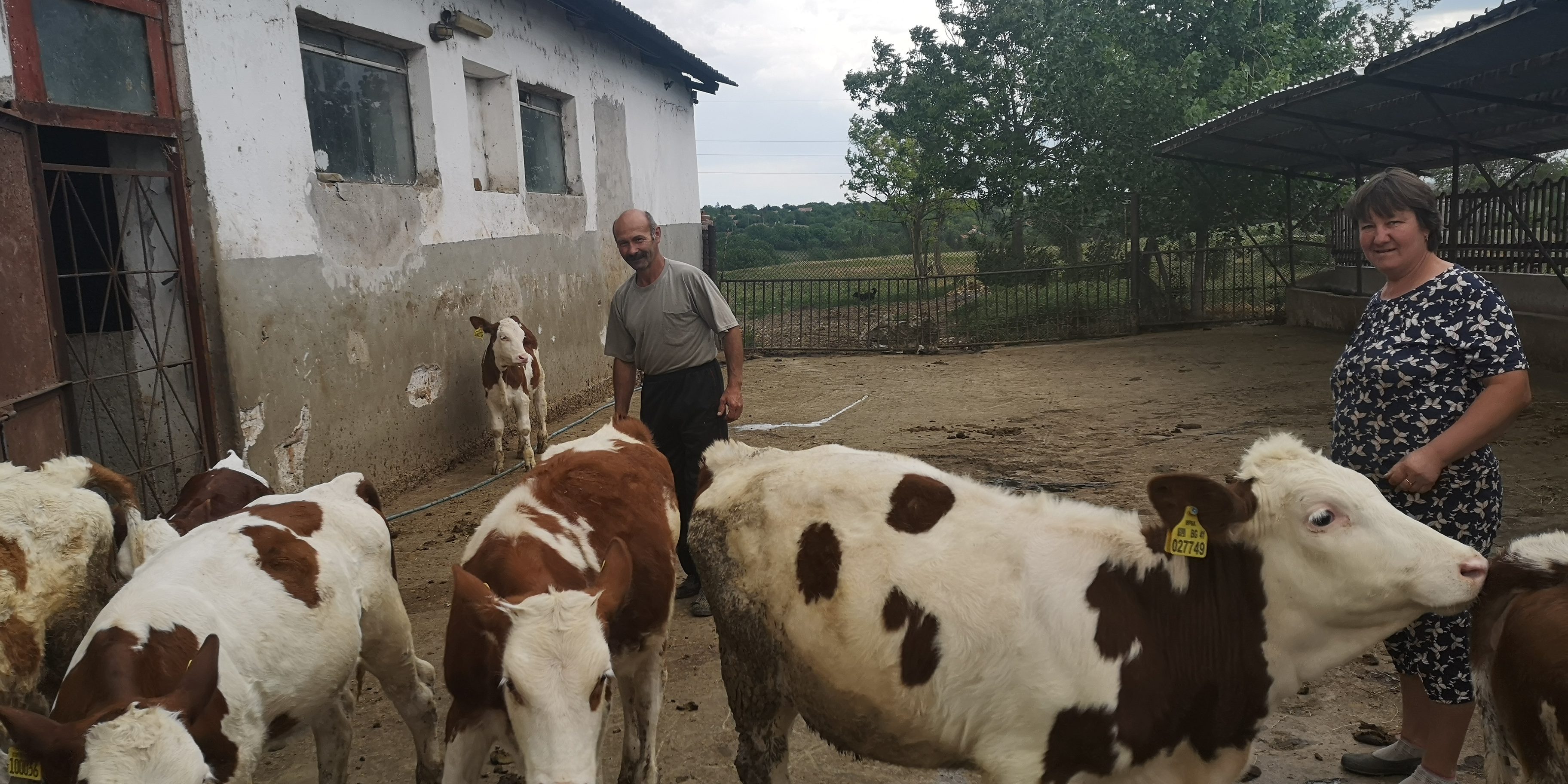 Today we will meet you with Ivo Ivanov, owner of a farm in the village of Lazarovo, where he has been developing a family business with dairy cows of the Montbeliard breed for almost 10 years.

Located south not far from the town of Knezha and west of the river Iskar, the region is known for its large temperature amplitudes – sharp and cold winters and summers with great heat. Favorable climatic conditions are a prerequisite for highly developed agriculture and it is no coincidence that the corn institute is located here. Livestock is also highly developed. The area is rich in groundwater, especially in the lower parts.

Near the village is the dam Enitsa, which together with the rich game areas and the river Iskar, which flows only a few kilometers, creates excellent conditions for hunting and fishing.

Some of the ancient Bulgarian holidays are preserved in the village, such as the “Traditional National Evening”, which is held every year on the eve of March 3. Then the grandmothers take out of the chests the old costumes that their mothers and grandmothers used to wear on holidays, and a competition is organized for the most original costume, singing and outplaying.

Ivo and his wife greet us smiling with a table prepared for guests and we start a very casual and frank conversation.

– Hello, Mr. Ivanov, please introduce yourself and tell us about your journey in animal husbandry.

– Hello, my name is Ivo Tsenkov Ivanov and I am 54 years old. I have been involved in animal husbandry since 1992.

I worked in the military plant in Cherven Bryag, and after its bankruptcy for a short time in Pirogov Hospital in Sofia as a nurse. Even while working in the factory I had a black-and-white cow, which I took care of with great pleasure. At that time, state-owned cooperatives were liquidated and mainly black-and-white animals were sold.

I will never forget that the cow in question, which I bought from the cooperative in the first year, gave me only 7 liters of milk. I wondered what it was all about, but in fact it turned out that the reason was the wrong way of growing. The same animal in the second year under different diets and normal conditions began to give 27-28 liters.

I returned from Sofia in 2011 and I was sure that I wanted to raise cows. I started with two, then four animals and gradually increased the herd. At the time, I was breeding them with a bull, but the doctor who operated the farm convinced me that I had to inseminate artificially and select the herd to improve the results. At the same time I bought a red and white animal that I came across by chance, which I really liked. It turned out to be a Montbeliard breed. Thus, this has become my favorite breed and to this day I inseminate only with such semen material.

The animals then gave an average of 18-20 liters and a total of 23. We raised them with my wife and two workers. The farm building was a former pigsty, and with both hands, we gradually created the farm out of nothing, for which I am grateful to my wife, because she has been my greatest support all these years.

But the work was a lot! We made fences, mangers, a new disinfection channel and from the first attempt we received a successful categorization. The ceiling is a bit low for raising cows, but so far we have not had the opportunity for a more serious investment to fix it.

– You have video surveillance! What necessitated its placement?

It was necessary because last summer they deliberately set fire to 5,000 bales of hay. The cowherd who was grazing my animals had inadvertently dropped them in the neighboring fields, sown with corn, which is owned by a large tenant – Mr. Dichevski. The level guards asked me to pay them BGN 20,000 for the damage to the corn, and I, of course, refused. The amount was not at all adequate to the damage done to the animals. They threatened to set me on fire and set the bales on fire a few days later. The security guard who did it wanted the money for himself and that has nothing to do with Mr. Dichevski. The arsonist in question went to prison and paid me compensation of BGN 12,000. I am grateful for the luck that the shed and the farm did not catch fire. It was a midnight nightmare. After this incident, we set up cameras that now work for us to monitor the animals when we are not on the farm. If there is a problem or calving, we manage to react very quickly.

– Since when have you been a member of the Association?

– I contacted Mr. Atanasov in 2014. At that time I still had mostly crosses, but it was a public secret that farms that are not members of associations and do not conduct selection will not receive subsidies. I was looking forward to it every day, but he traveled a lot and we only met a few weeks later. It turned out that we had seen each other during protests in Sofia at the time and we found many points of contact. My participation in the strikes is documented in Slavi Trifonov’s video for his song “No mercy”.

The benefits of my membership in the Association over the years have proved great. In the beginning, the reason for membership was only the subsidy, but then we understood so much from selection. At the moment, the herd is incomparable with what it was years ago and NARMS has a great merit for that. I have never been denied assistance, they put me “on the road” when needed, and we look forward to meetings to see our colleagues.

– How many animals do you have at the moment? Why is Montbeliard your favorite breed?

– I have 56 chapters in total, of which only 6 are crosses. All other animals are purebred Montbeliard. This breed is the best for me and I will always keep such animals! The quality of the milk cannot be compared to the black-and-white cows at all, and my Montbeliards are no longer inferior to them in terms of quantity.

– Do you get a better price from dairies for quality milk?

– Nonsense! Mission Impossible! Not only is the price low, but the payment is delayed for months! Milk is cheaper than lemonade in the store!

– How do you raise animals?

– Tied in the barn, but we also use the neighboring meadow during the day. We produce the roughage ourselves. We do not feed them by prescription, but we try to include everything necessary in their rations.

– Are you planning any renovations on the farm? Will you make a milking parlor?

– This is a big bite for us so far. We are considering applying for measure 4.1 and building a central milk pipeline to facilitate milking. At the moment it is very complicated and takes a lot of time – tires, buckets, and we milk them both and it’s exhausting.

– What is the everyday life of the Bulgarian farmer? Is your work valued?

– We are grateful for the subsidy, but the price of milk is ridiculous. Now it is 60 stotinki, and next month they may decide to be 40. There are no restrictions for this, but for us there are as many rules and requirements as you want. Milk checks are done every month.

The neighbor has neither purebred animals nor a farm – everything is in mud and dirt, but our milk is taken with a tank and paid for equally. I tell them when there were strikes “Come and let’s protest!”, They answer me “Whatever you take, I will get. I don’t need anything else. ” Unfortunately, this is the Bulgarian mass thinking. Otherwise, they are first in line for subsidies and one cannot catch order, and at the protests we are always one house people! So nothing will change – there are rules and checks only for those who are in the light, and others receive without doing anything “between the drops”.

Unfortunately, in Bulgaria the people who follow the rules are a minority! Subsidies are a very good thing, but they should be given to farms that make an effort, not to a “cap”. There are so many dead souls, why no one checks them, and they still come to my barn !? With one herd 5 farms can pass inspection! All colleagues know what this is about! But we are all silent, and change depends only on us.

– A very revolutionary finale to this candid conversation! Thank you and hopefully we provoke reflection in more people with these words of yours! We will come again when the milk line is ready!

– It was a pleasure for me and I will be waiting for you to visit us again soon!