“In Western countries, being a farmer is prestigious and people respect the work of breeders” – Interview with Kiril Pramatarov from Gotse Delchev 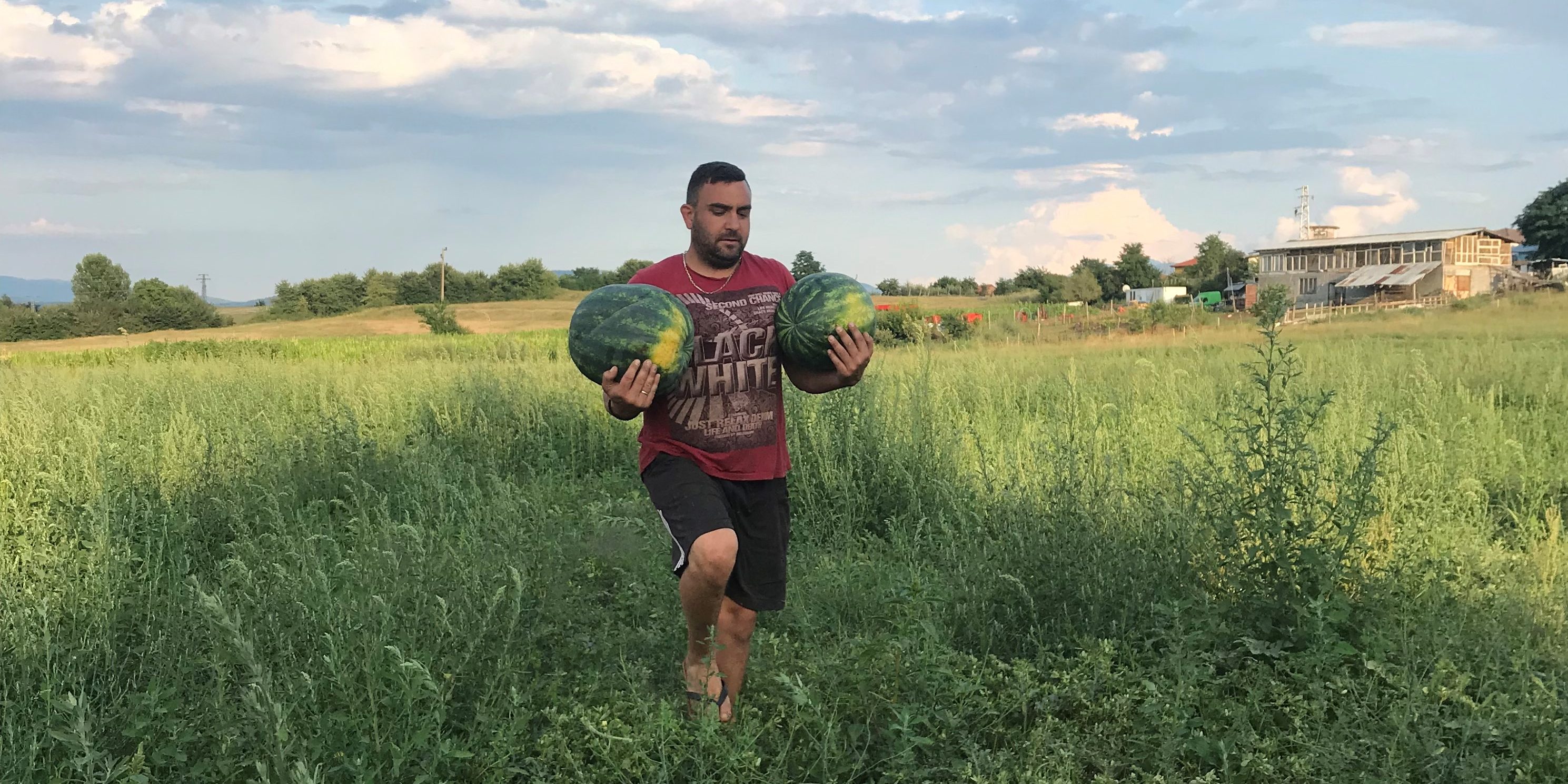 Today we will meet you with a former and hopefully a future member of NARMS.

Kiril Pramatarov is a farmer from the town of Gotse Delchev, who until recently developed a small farm with dairy cows, Simmental breed in the village of Koprivlen. Coincidentally, he made the difficult decision to terminate this activity, at least for the time being, but nevertheless maintained his good relations with his colleagues and members of the Association.

What made Kiril invest in a farm in Bulgaria after years of working abroad to have capital for his own business and how our state managed to make him give it up, he himself will tell us in the following lines.

– Hello, Kiril, nice to see you! Introduce yourself to those who don’t know you.

– Hello, my name is Kiril Pramatarov, I am 35 years old, from the town of Gotse Delchev. I am a hereditary breeder. My grandfather and father raised mostly sheep, and I turned to cattle. I was 23 when I bought the first black and colorful animals from the village of Musomishte.

In 2013 I bought 5 purebred Simmentals from Troyan and soon after that I decided that these are the animals I want to raise. There is no basis for comparison between the two breeds. I inseminated them artificially and enjoyed every newborn female offspring.

– You were a member of the association and willingly developed the farm, but at the moment you are not a cattle breeder. Why did he give up?

– The first reason was that there is no labor force, and for one person the care of the farm is impossible. I began to become physically exhausted from work. There were times when I couldn’t milk my animals, and I had to take care of everything myself. There is no day off in this work and when the cows become more and the commitments increase. I had no time for my family, and there was no question of a vacation at all.

The other reason is that in 2017 they limited the support of selected animals to a minimum of 20, which was a big blow for small farms.

Even after the suspension of subsidies, I continued to grow them for 2 years and be a member of the association, but my desire ran out at one point and I decided to pay attention to my family.

– Are you done with cattle breeding forever?

– Of course, I carry it with me. It took me almost 2 years to make such a difficult decision, but I was really exhausted from work. I couldn’t count on anyone. The workers came and went, and I generally did everything myself.

I sold the animals in Yakoruda. They were very nice and I gave them up just when I started to see results from my efforts, but there was no way.

I am currently on hold. I hope that after my parents retire they will have the opportunity to help me build and develop a farm.

– What is it like to be a young farmer in Bulgaria? I guess you started with great enthusiasm.

– In 2008 I returned from Portugal, where I worked on cattle farms. I had saved some capital and had a great desire to do what I had seen there. In Western countries, being a farmer is prestigious and people respect the work of farmers.

I had the illusions that I could achieve the same in Bulgaria, but things turned out to be very different. I bought the first animals. At first I felt winged and it was a huge dream of mine. I was not married yet and I was generally concentrated only on the farm.

I am very grateful to my wife that, although her interests are quite different from raising animals, she never complained and tolerated my constant absence. Sometimes I came home from the field after midnight.

The problems started one after another. Subsidies were limited, I had a problem with the legalization of the land, there was no labor force and gradually the enthusiasm was replaced by the Bulgarian reality, unfortunately. You put in a lot of effort, you compromise with your family and your free time, and in the end you’re not even respected for the hard work you put in. Neither from the state nor from society.

Almost all the money I saved by working in Portugal disappeared in costs, equipment and problems, and the return still did not come.

I tried to apply for several programs, but it all ended where I lacked contacts and connections with the “right people”. In Bulgaria, unfortunately, everything happens in the second way, and I did not want that to happen. With hard work and perseverance, one should be able to develop a business and be supported.

When my child was born, I missed all the important moments with him. He was 5 years old, and I had no memories of that period, because I was still gone. There was no way I could take them to sea.

– You worked abroad on a farm and you say that this work is respected there. Why do you think there is such a problem with the labor force here and it is so unprestigious for young people to work on a farm?

– They are ashamed to work on a farm. In Bulgaria, farmer is a dirty word. I have heard statements like “How will I work with animals, then my wife will go out to drink coffee in the city!”. “Cowboy” is an offensive word, obviously. On my farm, all the workers were respected. My family took care of their every need or problem. If necessary, we always took them for an examination and provided everything we needed – food, housing, medicine. When they needed a day off, I never refused them. Advance too.

When I worked in Portugal I was given a flat without any conditions and no one cared if I was sick, healthy and had problems – the next day I had to be at work and that was without comment.

Despite all the care my family and I took, there was constant dissatisfaction. The net salary they received was over BGN 1,000 with free accommodation, food and everything necessary, which is much above average for the region. They had 4 days off a month. Finally they get up and leave without even calling.

– What do you think is the reason for this behavior – mentality, laziness or something else?

– For me personally, the problem is in the overall mentality of us Bulgarians. He is infinitely disappointing! People came to work for me who literally had nothing to eat. Everything was fine for a month or two and on the third day they started to crave for more, to look at how much I earn, not to do their job. It’s like I work for them, not you for me.

– What did he do the day he sold the animals? How did you feel?

– I do not remember exactly what I did that day, but even before that I knew that if this moment came I would not be separated from my family for at least a week. That’s what I did. After a few days we went on vacation. I had decided to pay maximum attention to them and sleep late.

– Did you really manage to rest after all the years of sleepless nights?

– Actually not. I didn’t even sleep because I was used to being constantly under pressure and reacting if something happened. But I watched my child sleep and for the first time I had time to enjoy him and spend time with him as a father.

– This once again proves the huge sacrifice made by farmers in small farms who take care of their own animals. You yourself said that this is not appreciated by society.

– Yes, definitely. Especially in small towns like ours. With us, no matter how “unprestigious” it is to be a farmer, there was a lot of envy. Everyone looks at you without realizing the round-the-clock work you do. What you have, what you eat, what you drive – this is the most important thing, unfortunately. During these years, no one said anything nice to me or greeted me. People don’t like those who make an effort and want to do something meaningful. This irritates them and they try in every way to spoil it without gaining anything from it. This is the mentality I was talking about.

Such, in fact, is the attitude of the State towards us!

Many of my labor problems came from “benevolent” villagers and colleagues who were able to influence the motivation of workers with talk and intrigue. This is very unfortunate, because instead of making an effort to fix their own lives, they “feed” on the problems of others.

But it does not matter – who is accustomed to work will still work and succeed. The others will talk!

– What are you doing now?

– With agriculture mainly. I am also a municipal councilor.

– What an unexpected development !? … And how does a young former and perhaps future farmer feel in the Bulgarian “political waters”? Are they cloudy?

– This will be my first and last term. Definitely my place is not there. It is not my field of expression and I hope to return soon with new strength and enthusiasm to cattle breeding. This time I will do things with all the lessons learned from my previous experience and I will certainly not give up. There is nothing more useful than a negative experience, because it teaches a lot. The first time I was unprepared for many things, but I learned my lessons and I think I will do much better. I don’t want to and I can’t do anything else. This is my calling.

– What would you say to young people who are now returning from a western farm with a lot of labor and deprivation and want to be farmers?

– I’ll tell them to try for sure. Do not give up and be prepared that they will do everything themselves, without a day off, will not sleep and will have to deprive themselves a lot. But it’s worth it! Do not pay attention to anyone and pursue your goals!

– Wonderful wish! We look forward to seeing you again! Success!

– Thanks! Then I will be happy to invite you again!