You are here:
ADVICES FROM THE SPECIALISTSLATEST NEWSNEWS 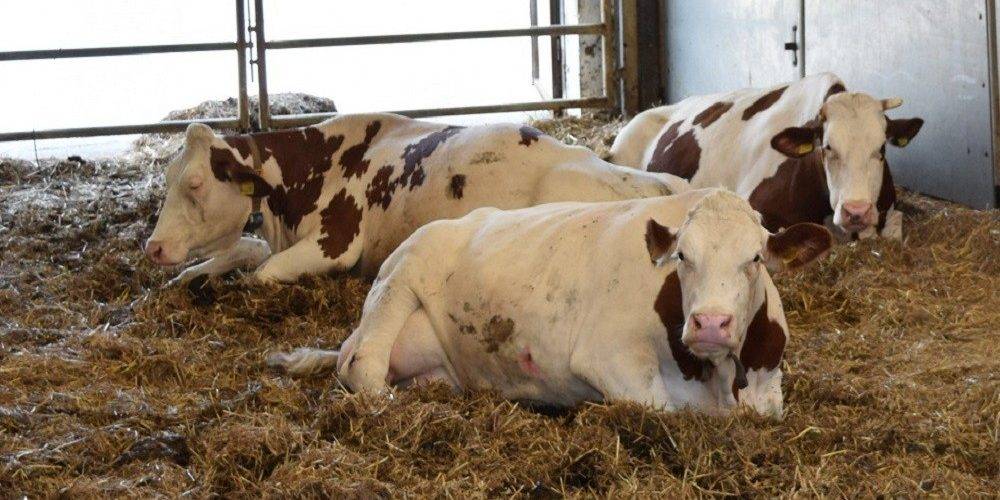 The postpartum period of dairy cows is very important for the health of the mother and the offspring obtained, as well as the main economic goal of cattle breeders, related to the reproductive process of animals.

If we assume that the average duration of pregnancy of the cow is 280 days or 9 months, then the remaining period is 3 months. Service period is the time for monitoring, prevention and resolution of health problems before the next insemination and fertilization.
To avoid problems with animal reproduction, the farmer must pay serious attention to the monitoring of parturient and the management of the postpartum period, and especially the first 30 days after calving, which are particularly critical. If during this time the solution of emerging health problems is missed, they will inevitably have a negative impact on the reproduction and productivity of the animals. Lack of adequate care and treatment after calving can lead to lasting consequences that can lead to infertility or deterioration of the general condition of the cows.

As some of these problems have no clinical manifestations, it is mandatory to closely monitor the animals and monitor for several signs that may be a signal of infections or diseases.

The period between calving and subsequent insemination is relative and is directly dependent on the physiological needs and condition of the animals. As the most optimistic and economically profitable option, this period should last up to three months. This is achieved only with good planning, management and adequate animal care. An extension of more than a month is unprofitable in view of normal milk productivity.

Sometimes the so-called voluntary waiting for insemination to manifest and restore normal sexual-cyclical activity in animals. The wait can last about 70 days after calving and if the animal does not show sexual-cyclical activity to resort to hormone therapy and induction of estrus (dispersal). It is accepted that the service period lasts about 80 days and can be extended to 100 days.

There are several indicators that should be carefully monitored immediately after calving. Restoration of the uterus to normal and ovarian activity are of paramount importance. These two factors are related, but do not always occur simultaneously. Even if the uterus recovers, ovarian cycling may not return to normal for a variety of reasons. Sometimes the opposite is possible – restored sexual cyclic activity, but there are problems with the condition of the uterus. To establish the problem in this regard, a good knowledge of the physiological processes of the uterus and ovaries is mandatory.

The first care of the newborn offspring immediately after calving is also extremely important. He must immediately take a sufficient amount of colostrum, as it is an indispensable biological fluid completely different from milk. It is very rich in vitamins and minerals. The most important ingredient, however, is contained in a large amount of antibodies or so. passive immunity. Colostrum should be taken as early as possible – in the first hours. Otherwise, he will not receive immunity from the mother and subsequently his resistance to disease will be very low. Under no circumstances should the intake of colostrum be underestimated, as the antibodies contained in it are highly molecular, and immediately after birth the permeability of the newborn’s intestinal tract is very high and these large antibodies can pass and be taken. in the body. Many studies have shown that after 6 hours after birth, the permeability of the intestinal tract is significantly reduced and even if colostrum is taken, it will not be fully absorbed by the body. With each passing hour the permeability decreases and after 24 hours it is only 10%. Colostrum should be given in time in sufficient quantity to 2 or 3 doses. There is no artificial product that can replace colostrum.

Before we consider the mandatory care of calved animals, let’s look at the main 3 phases of birth.

The first is open when the soft birth canal opens.

The second is the expulsion of the fetus or actual birth.

The third is the separation of the placenta.

If the placenta is not removed, the birth is not over. There are certain requirements that if not met, a problem is found. In a normal birth, the placenta should be removed within 12 hours of calving. If this does not happen, then there is retention of the placenta and it is necessary to take measures and stimulate this process.

Another problem we may have after birth is inadequate obstetric care in fetal extraction. It is very important that this assistance is performed competently and that the traction force does not exceed the strength of two people. Sometimes the fetus is not located correctly in the birth canal or there is a disproportion, ie. the fruit is larger and requires additional assistance in removing it. Using too much force or inadequate help can lead to soft tissue damage or trauma and rupture of the soft birth canal, pelvic bones, and even blood vessels. Very often the pelvic nerves or the nerves of the soft birth canal are damaged. In this situation, it is likely that after withdrawal of the fetus, the animal will not be able to stand up, feel pain and lie down after the separation of the placenta. In many cases we are talking about the so-called postpartum paraplegia or unilateral or bilateral postpartum nerve paraplegia. The lying of animals leads to severe consequences. Stale animals cannot be milked, and the accumulation of milk in the mammary gland increases the pressure and leads to pain and great discomfort. Eating is also difficult. Immobility also leads to injuries on the surface of the skin. All this makes it mandatory to provide obstetric care only by an authorized and competent veterinary specialist.

In heifers, great care must be taken with feeding, as the accumulation of adipose tissue significantly complicates childbirth. Improper nutrition also leads to insufficient contractions of the uterus, which reduces the ability to push the fetus and the problem of difficult birth. Proper milking is also a problem for heifers. No residual milk should be allowed. It is good to do a massage and even when using a unit then to milk it by hand to unclog the milk ducts well.

Common after birth is the so-called postpartum hypocalcaemia, which is essentially a decrease in blood calcium. This could lead to severe consequences and even a comatose animal.

Diseases due to inflammatory processes

Prevention of predisposing factors is of major importance. Malnourished weak animals are highly prone to infections. They are unprepared and their immunity is very weak, as a result of which the body’s defenses at birth are greatly reduced, and the opening of the uterus is like a gateway for microorganisms and bacteria.

If we want to carry out proper prevention, we must take comprehensive care of the animals. – to maintain good health status and nutrition during the dry season; to carry out all necessary preliminary vaccinations; to prepare clean and sterile maternity wards and instruments; the operator should also take care of his own hygiene before providing obstetric care.

If the farm does not have a separate maternity ward, at least a clean and disinfected space of a few meters must be provided for the animals about to give birth and they must be at a distance from the others. They must be monitored constantly. Even with rubber flooring, straw bedding is mandatory.

After birth, the animals should not return immediately to the main group of lactating animals. They have reduced immunity and the uterus is still open, which makes them highly susceptible to diseases, microorganisms and bacteria. They should remain separated during the first weeks after birth and be closely monitored for the proper course of the recovery period.

In the first 3 to 4 days, the animal’s temperature should be measured in the morning and evening. In cows, inflammatory processes do not have an immediate external manifestation and a rise in temperature may be the only indicator of a problem.

When the animals are separated, feeding and fluid intake are more easily observed, which are also key indicators of general health.

It takes about 2 weeks for the uterus to fully recover. During this time, the nature of the lochial fluids leaking after calving must be monitored. Normally after the first 3-4 days they should be more abundant and have impurities. After 4-5 days they should become clear and clean. The cervix should be completely closed within 14-15 days in healthy animals. The color, density, odor and consistency of the secreted lochial fluids should be monitored. If they are not normal and do not clear over time or have an unpleasant odor, this is an indicator of ongoing inflammatory processes.

Another indicator that needs to be closely monitored is the increase in milk production. The colostrum period is about 5 to 7 days. If the animal has been treated with antibiotics, the milk must be discarded within the next 3 days after ingestion.

The control during the first 2 weeks after birth must be very strict and the separation of the born animals is extremely important – both for them and for the other cows in the herd. If calved cows are carriers of infections and return to the main group of lactating animals, they will spread the disease. Unfortunately, it is common practice for animals to return to the main group immediately after calving.

The principle is that an animal with a retained placenta, endometritis, mastitis or other problems should not leave the maternity ward until it has been cured. Monitoring should not be underestimated – it is the basis of early diagnosis and good health and high productivity of animals!

Sick animals should also be as far away from the maternity ward as possible, as cows that are about to calve or have recently calved are severely immunocompromised and prone to disease and infection.

All problems should be cleared before the next insemination and fertilization.

Very often the reason for unsuccessful inseminations is that the uterus has regained its size, but not its lining, which requires time.

Around the 30th day, a rectal examination should be performed to determine the condition of the uterus and ovaries – whether they are smooth or have any formations. It is recommended to massage the uterus.

By synchronizing the estrus, normal sexual-cyclic activity can be restored, and insemination should not take place during the first heat, but only stimulate the natural processes. Insemination at the first heat carries its own risks and the success rate is significantly lower. Lactation time is shortened and it is also not economically viable, as the animal will have to be dried at the peak of its lactation.

If insemination is too early, there is also a risk of hormonal imbalance, even if early embryonic mortality occurs.

In summary, the main steps for proper management of the postpartum period are constant monitoring, adequate conditions and nutrition of animals, high hygiene and timely competent treatment in case of health problems.